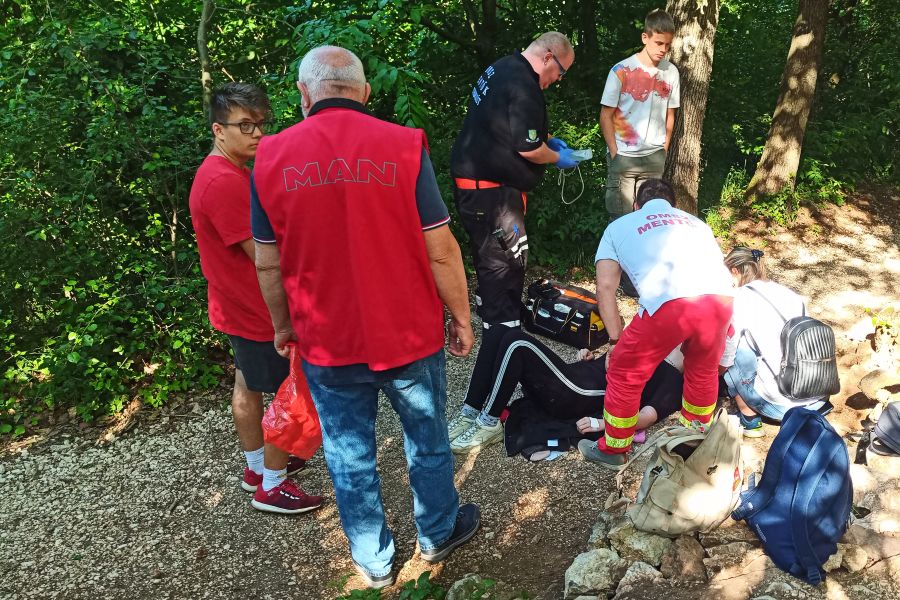 On 26th of May 2022 at 15:10, the Dispatch Control Center of the National Ambulance Service requested help from the Hungarian Cave Rescue Service. At the "Kaán Károly" Lookout at the top of "Hárs Hegy" above "Szépjuhászné", a popular hiking spot on the outskirts of Budapest, a 14-year-old girl became ill during a class excursion, and was unable to continue the hike or even to get down from the mountain on her own.

The incident did not happen in a cave, but as it turns out, we can be called in to help quickly on the surface as well. We knew the location well (the famous "Bátori cave" opens here), so we knew that it was accessible by an all-terrain vehicle.

The BMSz all-terrain vehicle unit went to the scene, picked up and escorted the National Ambulance Service doctor and nurse to the casualty. The young lady was given an IV fluid on the spot and was then transported by all-terrain vehicle to the ambulance waiting at the foot of the hill.

We wish you a speedy recovery!

The longest rescue operation in the history of the Hungarian Cave Rescue Service ended on at around 2 p.m on Sunday, the 10th of April 2022. After 7 days of search and rescue, the body of a cave diver who died on the 3rd of April during an exploratory dive was brought to the surface.

The body of the missing diver was found on Tuesday, at a considerable distance, about 250 meters, from the start of the dive, the entrance to the “Reménytelen” (Hopeless) Sump, at a depth of about 30 meters. The cause of the accident seems to be a collapse of the passage, the traces of which were discovered by the cave divers diving the next day, at a depth of -48 meters at the end of the known passage.

The terminal zone of the passage was filled up with muddy sediment and the diving guide rope was stuck beneath it. The possible signs indicating the collapse are being examined by the experts of the Aggtelek National Park by analysing the data of the karst water level registering well and the water flow meter at the “Nagy-Tohonya” spring.

Cave diver accident in the Kossuth cave near Josvafő

On Sunday, 3rd of April 3 2022, members of a cave diving group from the capital conducted exploratory dives in the Kossuth Cave near Jósvafő. An accident happened during their dive: one of the cave diver did not return by the prescribed time to the starting point located in the Apáink-terme (Our Father’s room) part of the cave. The companions of the  divers, who were provided the safety of the diver set off immediately after, but were not able to find the trail of the safety guided rope in the known passages. The visibility in the underwater parts of the cave at that time was next to zero.

After the alert of the cave rescue teams, the Gömör-Tornai Territorial Unit of the Hungarian Cave Rescue Service arrived at the scene in the afternoon, with the assistance of the North Hungarian Association of Cave Rescuers, the Bakonyi Cave Rescue Service and the Speleo Roznava (SK) In collaboration with BAZ County Specialists of the Disaster Management organization, the Neptune Diving Club and the cave divers of the Amphora Diving Club, which has been researching the cave for decades, began planning further dives to locate the missing diver. Additional assistance arrived for the operations in the evening and in the morning, including several rescuers with relevant cave diving experience. 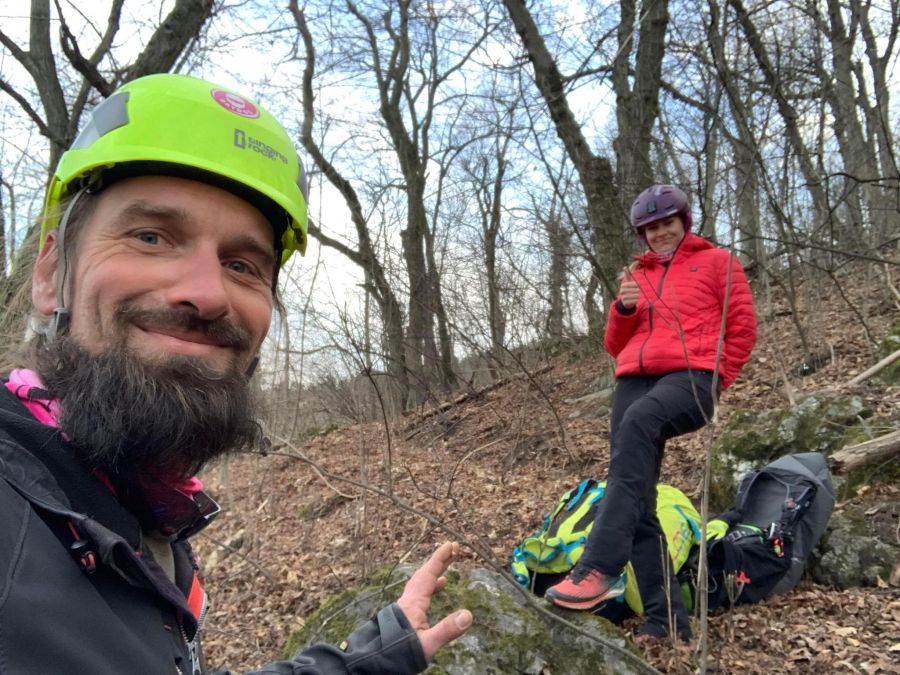 On the afternoon of 28th of November 2021, in the rainy weather, a middle-aged lady suffered a fractured ankle during hiking on the area of „Hármashatár Hegy” on the side of „Újlaki Hegy”. Due to the difficult and exposed terrain, help was requested on the helpline of the Hungarian Cave Rescue Service (BMSz), and also an alert was also issued on the rescue hot-line of the National Ambulance Service. By consulting a relative of the injured by phone, the location of the patient could be determined, and a little later accurate GPS coordinates could be obtained.

The relatives reported that the person had suffered a leg injury, but not injured anywhere else, was conscious, they can talk to her, and is not disturbed - but he certainly could not stand on her feet on her own. They were asked to cover the patient with all the available clothes and coats for protect against the cold. They were reassured, that help will be arriving soon.

The report revealed that the site is about 700 meters from the end of the paved road that can be reached by car or by ambulance. From there the scene of the accident can reached on a steep rocky road, by SUV for a shorter distance and then only on foot.

Rescue in the Börzsöny Mountains with the National Rescue Service 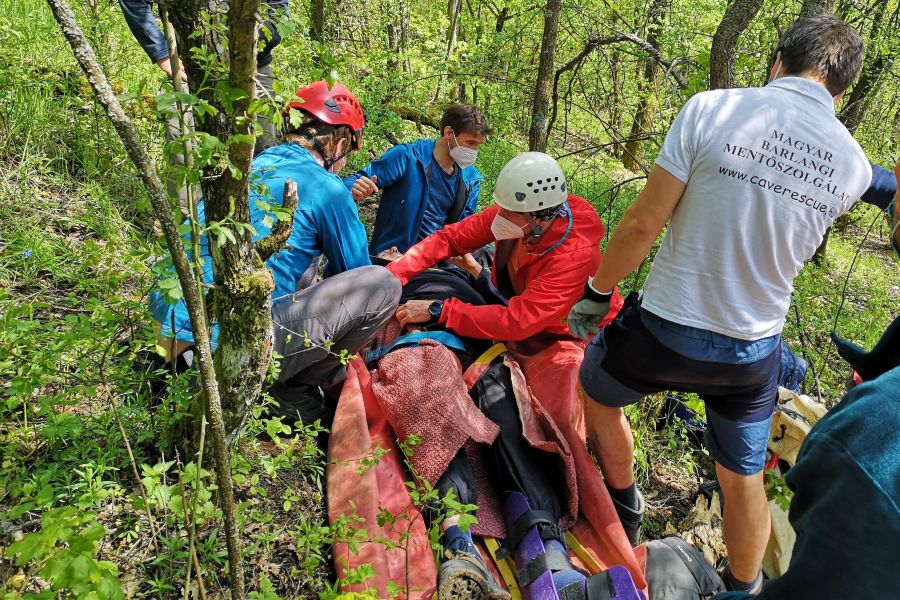 On Saturday, May 8, 2021, shortly before noon, the Hungarian Cave Rescue Service received a call for help about a hiker in Börzsöny, near Nagyirtáspuszta, suffered an ankle injury on só hegy (Salt hill), he is unable to stand on his feet, so he has no chance to get off the mountain without help. They also asked for help from the National Ambulance Service (OMSz), which sent the ambulance from the town Vámosmikola to the scene.

The caller also mentioned that we should prepare for a heavy lift since the gentleman weighs around a 100 kg so that it will not be easy to transport him on the difficult terrain.

We issued a state-wide alert to the rescue members and then negotiated with the OMSz dispatch  so that our units could work efficiently together.

At 12:30 the first cave rescuers together with the OMSz ambulance arrived in the parking lot of the nearby Szent Orbán pension. We received the exact GPS coordinates of the accident from the caller, which allowed us to start our hike to the site, which was about 1.5 km away.