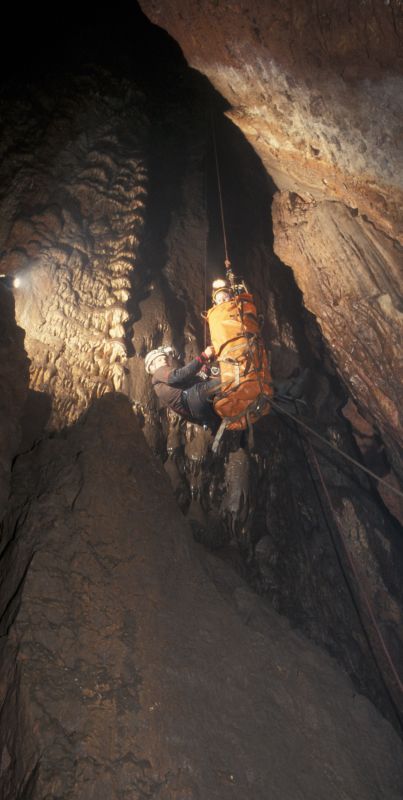 With a past of five decades, the Hungarian Cave Rescue Service is one of the oldest of its kind. Undoubtedly the major reason for the early emergence of the system is that there are now six inexplicably intricate labirynths of caves each several km long amounting to a total length well over 30 km under the inhabited central areas of the Hungarian capital with a population over 2 million.

Often by breaking open locked gates, reckless youths regularly ventured inside without the appropriate equipment and lighting, losing their way or suffering accidents.

In the past three decades the rescue service was alarmed more than a hundred times in Budapest alone. In most cases the lights ran down and people got stuck in the cave. Usually the families of those missing called for help.
No one should take the risk of losing his way or getting stuck too lightly. For example, only the bodies of four young men, of whom nobody knew they would go into a cave, were found by speleologists two months later. In a luckier case three missing young men were salvaged by the Rescue Service seven days after they had got stuck in a cave.
During the past three decades 13 people were killed in Hungarian caves. Apart from the four young men mentioned, three young speleologists died in a difficult section of Baradla Cave with syphons and the stream due to lack of oxigene and cooling. Two cave researchers died of nitrogenous gas poisoning a day after an illegal explosion in one of the caves of the Bükk Mountains.
In mental and physical exhaustion, a speleologist suffered cranial fracture when the makeshift life-line was broken in the Meteor Cave, and though the rescue team got him out safely, he died of the injury some weeks later. Two cave divers were killed in the underwater spring cave in Lake Heviz.
Another diver died in the syphon of the Szalajka Spring Cave in the Bükk Mountains.

Thus of the 13 deaths in caves, 4 were inexperinced young people and 9 were experienced speleologists, including 3 divers.

Besides the deaths, several critical injuries also occured in the Hungarian caves when only the quick help from the rescuers saved the lives of hose involved. For example, a photographer who was taking photos on the surface went into a cave change films in the dark but fell into a crevice suffering severe fractures and internal lesions.

On mother occasion two young speleologists, a boy md a girl, went for a weekend cave tour, but the girl lost her footing over a chasm suffering severe factures. The rescuers took very long to get her out from the extremely hard part of the cave. Tests showed that both had drunk alcohol before going into the cave.

After a tour of the Meteor Cave another speleologist girl, climbing the rope ladder in exhaustion, lost her balance when her incorrectly fixed life-line slipped off her and fell into the abyss. The rescue team succeeded in taking her to the surface and she recovered in hospital. 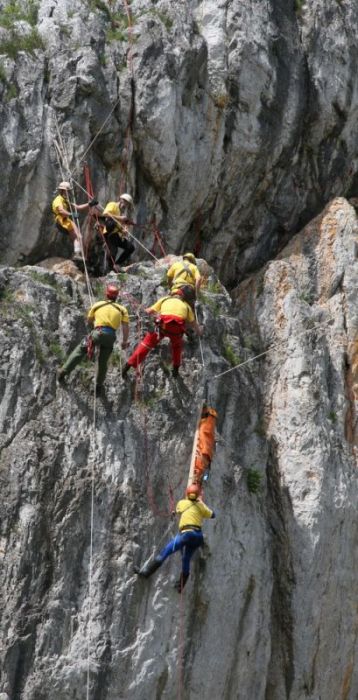 With due help from the authorities, the rescuers crossed the border with their equipment and some hours after the alarm they were on the spot. Unfortunately only the body of the diver stuck in the syphon could be recovered.

Examples could be listed on end, but I only wanted to illustrate how vitally important the work of the Hungarian Cave Rescue Service is and how many lives they have saved over the past thirty years.

We are convinced that a rescue service is really effective if it can contribute a lot to the education and training of young speleologists, if the most experienced rescuers can pass on their knowledge after analyzing the cave accidents so that the new generation may avoid similar accidents.

The results of the training and preventive efforts of the Hungarian Cave Rescue Service are tangible: less than half as many accidents have occured in the past decades than in the 1960s.

One reason is that the Hungarian speleological training system stipulates that only those can be cave tour guides and leaders of cave research who have taken part in a course of speleological technical and safety know- ledge and passed exams testing their theoretical and practical attainments.

Apart from the Hungarian Speleological Society, the Hungarian Cave Rescue Service under the aegis of the Ministry of Environment Protection and Water Management does its utmost to be capable of carrying out the most complex rescue operations both in regard to its equipment and the experience of its staff. 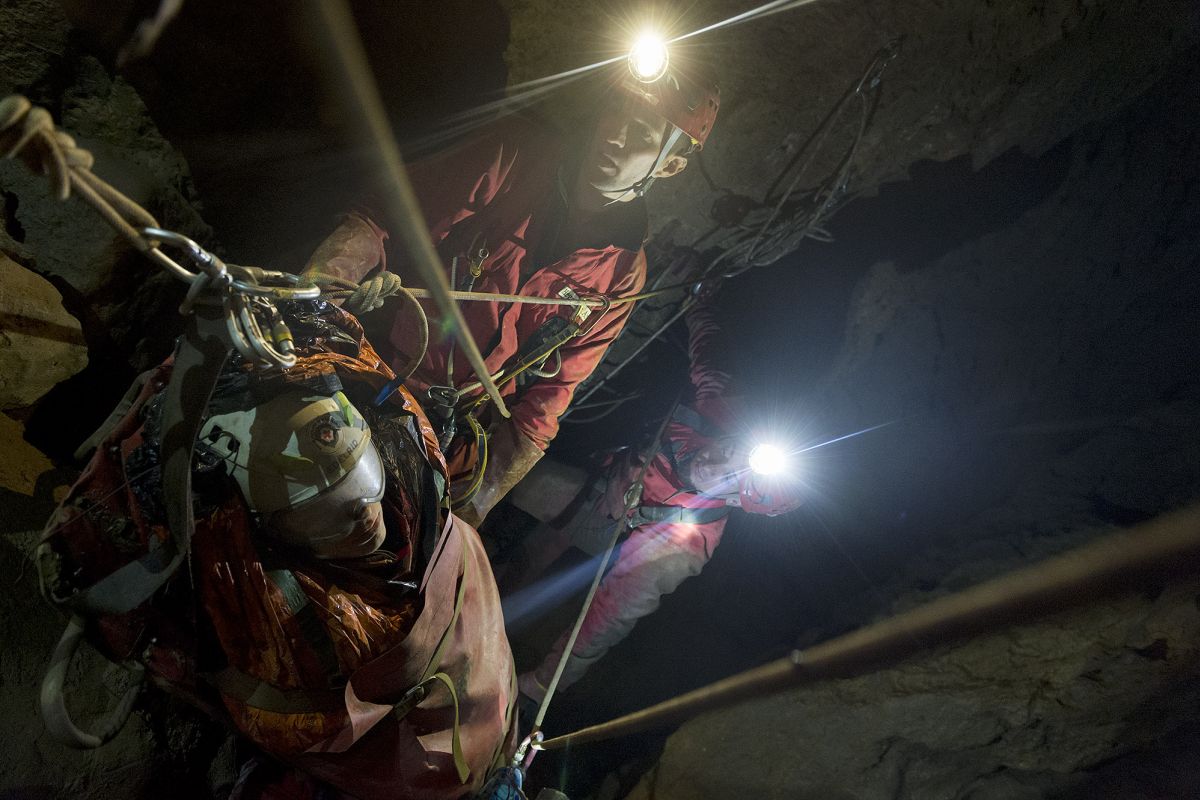 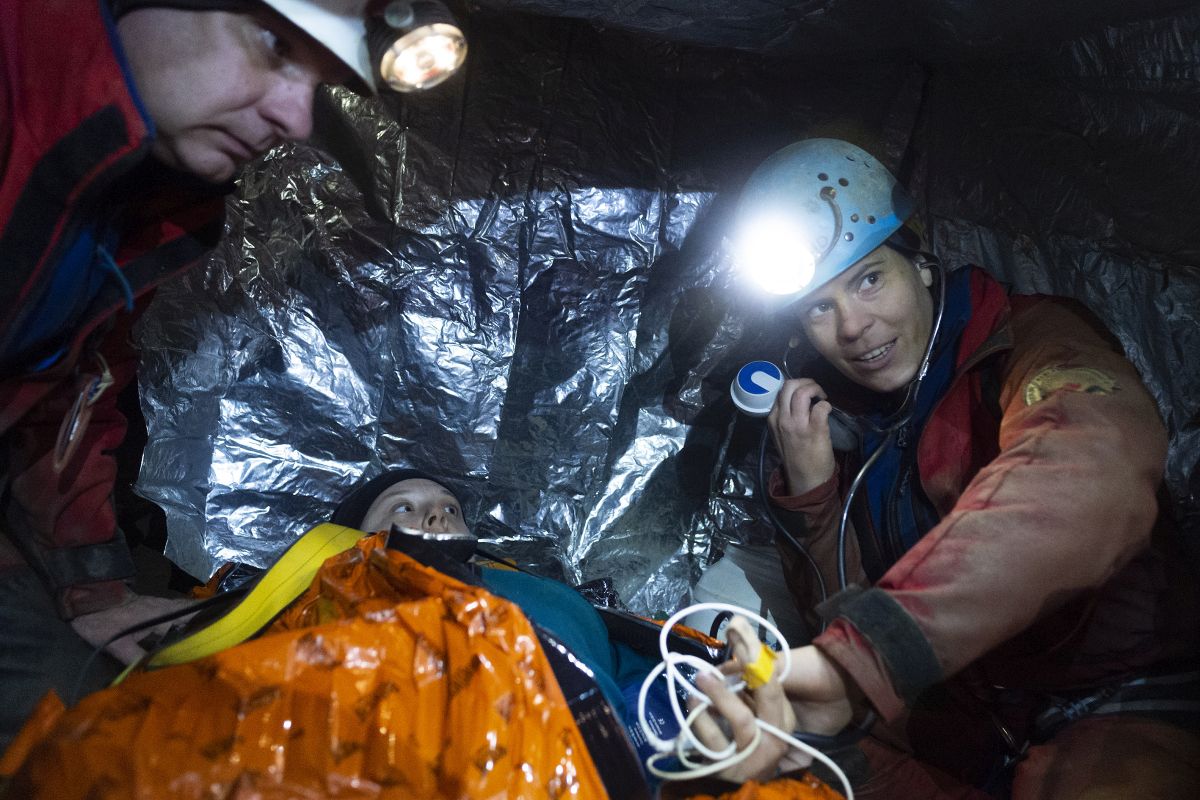