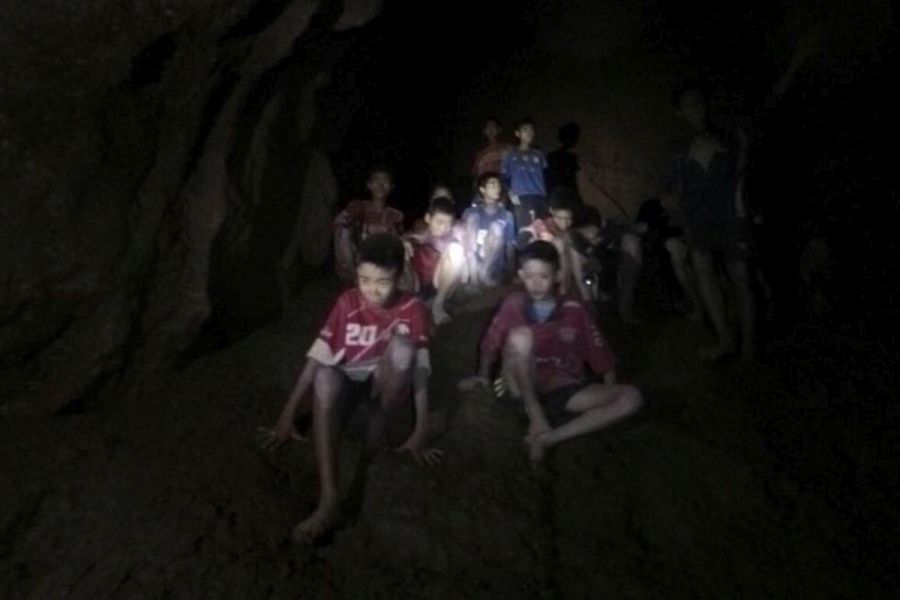 On 23 June 2018, 13 visitors disappeared in the Tham Luang Nang Non Cave in the Dai Nang Non region in the northern border zone of Thailand. The missing people are young between the ages of 11 and 25, a local youth football team and their coach.

The total length of the cave is about 10 km, it has several entrances. The cave is a complex, active karst cave with a creek, a part of which intended for tourists was equipped with sidewalks, stairs and railings.

The entrances were not closed, but information and danger signs were displayed. The main danger of the cave is that, unlike other karst areas, the possible floods here do not last for hours or days, but the flooding can persist throughout the rainy season. Getting the missing football team out of the cave was also prevented by the fact that some of the passages used to go inwards were submerged due to the heavy rains, making it impossible for the team to get out due to a lack of quailification and equipments

The search was started by the rangers of the competent national park, but other forces soon had to be involved. The rescue was further coordinated by the governor of the area, relying on both the Thai armed forces and the help of international volunteers in the rescue operations. 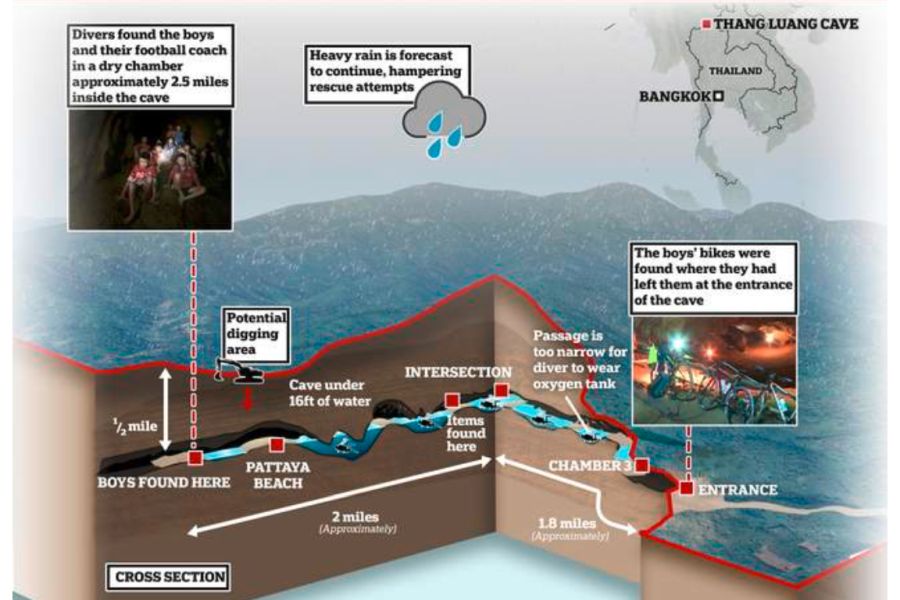 In the initial stages of the search, the known passages of the nearby caves were scanned by the rescue team of about 600 people, also equipped with drones, and scanning of the water-flooded passages started as well.

On the 9th day after the disappearance, 2 English cave divers found the whole group in the part of the cave called Pattaya Beach.

The children waited for the rescue units in good condition. The lucky finding toured the world press, and speculations began as to how the young people would be brought out.

There were many ideas for the safe rescue such as looking for new natural entrances, making an artificial entrance, rescuing underwater, and waiting until the end of the monsoon season. The natural entrances of the area were looked though by several caving teams from abroad, other teams drilled more than 100 exploratory shafts in the area to a depth of many hundreds of meters.

Efforts were made to reduce the water level in the cave in as many places as possible by pumping, breaking through the natural dams of the cave, diverting sinkholes on the surface, even at a price such that they were forced to flood several agricultural areas in the area. 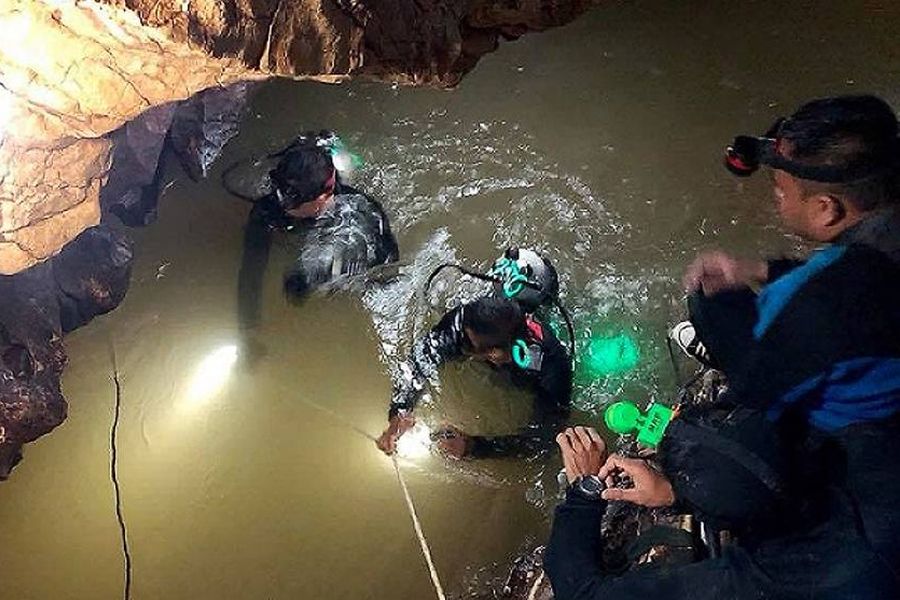 As a result of these operations and due to a few less rainy days, the water level started to decrease slowly in the affected passages, and the possibility of helping those trapped inside to come out to the surface underwater became increasingly outlined.

This solution promised to be very risky, which unfortunately has been proven by life as a 28-year-old Thai volunteer diver lost his life during a dive in preparation for the passages.

On the morning of 8 July, 18 divers, including military and civilian divers, began rescuing the young people trapped inside underwater.

The children were brought out one by one, each child was accompanied by 2 rescue divers.

Perhaps the greatest risk of the underwater activity was the potential panic of the children, strong sedatives were used during the rescue to reduce this risk. The most anticipated phase of the rescue, bringing out the 12 children and their coach took 3 days, and a total of 90 divers took part in it along with hundreds of volunteer cave rescuers. 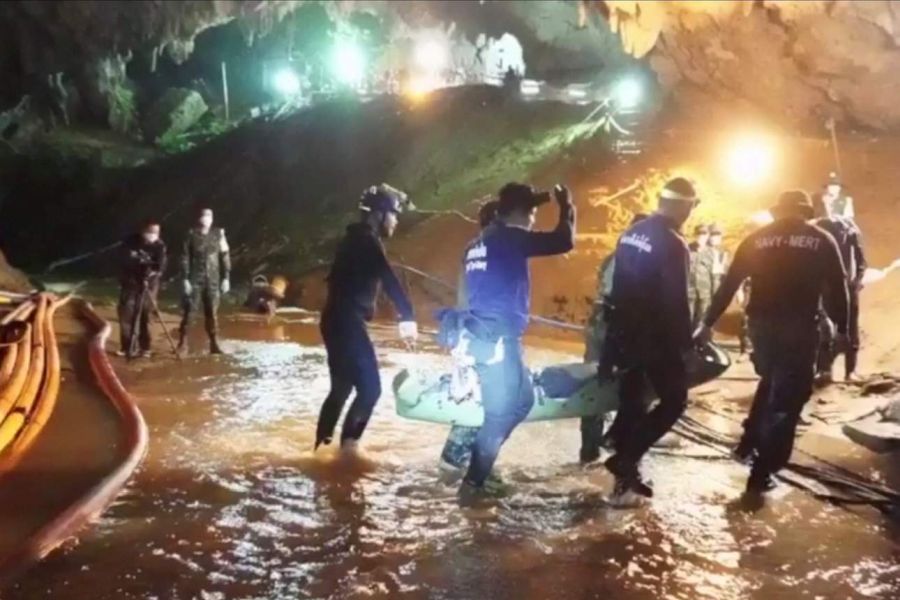 At the beginning of the search for the missing children, the presidency of the Hungarian Cave Rescue Service decided that it would be able and willing to send help to the scene in case of any request.

It also made this offer to ECRA (European Cave Rescue Association) and later repeated our offer to the Thai authorities through the diplomatic channels of the Ministry of Foreign Affairs. If required, we would have gone to the area with our medical, cave rescue and cave search capabilities.

Due to the extremely intense press interest, the Hungarian Cave Rescue Service reported on the events of the Thai rescue operation in several forums as an expert, we shared news from professional and other places, and provided explanations for the rescue issues.

After a unique rescue operation that has mobilized an unprecedented amount of rescue force, in addition to our own thanks, we would like to forward thanks of ECRA and the Thai authorities, in which we thank all the participants and those who want to help for their specific help as well as for offering help.